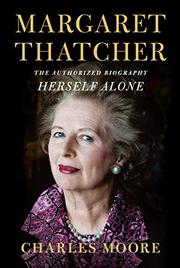 Herself Alone: The Authorized Biography, Volume 3

Continuing a story that, though skillfully told, runs very long, Moore begins in the late spring of 1987, when Margaret Thatcher has just won her third victory in the general election. Electoral contests in Britain, he reminds us, are “parliamentary, not presidential, and are based on parties, not individual leaders.” Nevertheless, it is indisputable that Thatcher won on the strength of steely charisma and achievements that lifted British spirits, from overseeing the end of a long recession to securing victory in the Falklands War. Things were vastly different in 1990, when British voters took an overwhelmingly different view of her: They were, Moore writes, “unimpressed by divisions over Europe, the return of double-digit inflation and the perceived injustices of the poll tax.” Worse yet, Thatcher had become personally unpopular as well, seen as someone who had simply stopped listening to the people. When she entered her third term, her approval rating was 52%, but at the end, it was below 33%. Spy scandals and the morale-sapping conflict in Northern Ireland did not help matters. Engineered out of the leadership of the Conservative Party by challengers such as John Major and Michael Heseltine, Thatcher was not shy about nursing grudges, considering Major to be “a nice, useless man, who cannot lead.” Moore shows that her last years in office were not without their own accomplishments, including cementing a renewed relationship with the United States and helping bring about the fall of the Soviet Union and an end to the Cold War. Nonetheless, the author also points to the failures of Thatcher’s brand of libertarianism, characterized by the mantra “diffuse, disperse, devolve.” That strain of politics has lingering effects in a Conservative Party still tinged with Thatcherism, with such results as Brexit and the specter of a U.K. that will perhaps soon be disunited.

Very likely the last word on the late prime minister, whose legacy is still playing out in Britain today.