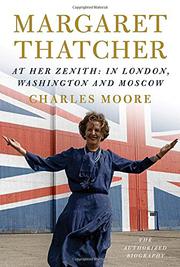 At Her Zenith: In London, Washington and Moscow

British historian/writer Moore delivers the second volume in his authorized biography of the pioneering—and divisive—prime minister.

As this volume opens, Margaret Thatcher (1925-2013) is riding high on the British victory over Argentina in the Falklands and the consolidation of power that it enabled. Inclined ever to go it alone, Thatcher abolished the policy group surrounding her, one that labored ceaselessly to keep the Conservative message strong while avoiding any overt impression of ideological purity, “which, if leaked, could cause such mayhem.” But leaked it was: whether dealing with Irish nationalists, striking coal miners, or a recalcitrant European Community, Thatcher was steely and bent on uncompromising success, evidenced by her “angry will” and unwillingness to make coalitions. The real world does not often work that way, of course, and in the few places where Moore’s narrative bogs down, it is in the details of bureaucracy that so maddened Thatcher—e.g., the matter of getting a budget passed. The author is surprisingly evenhanded: as he notes, Thatcher, like Ronald Reagan, seemed thoroughly uninterested in self-reflection, and some of the best writing in the book concerns the solid wall of cultural resistance that built up in the U.K., fueled by punk rock and Red Wedge–ish theater and writing. Stephen Frears, for instance, noted that his 1987 film Sammy and Rosie Get Laid was intended “to bring the government down.” Of course, if Thatcher was ever bothered by the negative depictions, she seldom let on. Moore closes by chronicling how she closed out 1987 with a stunningly comprehensive electoral victory. “No prime minister in the era of universal suffrage had ever won a third consecutive term before,” he carefully writes, though no thanks were due to Thatcher’s “extreme anxiety, ill tempers, and misjudgments in the campaign.”

Moore will probably not change minds about the Iron Lady, but readers inclined to be as fair-minded as he will find much of interest in his account of her years in power.