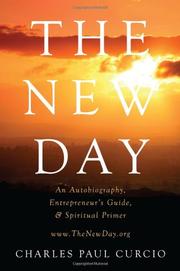 Entrepreneurial advice and astonishing tales from a tire company founder and pitchman retracing his spiritual journey.

Charles “Chuck” Curcio first made his mark starring in his own late-night television commercials for Tire Kingdom, the highly successful South Florida–based company he built from scratch. The inventive musical parodies and his colorful personality have achieved near-cultish adoration; the ads are still viewable on YouTube. But in this cosmological autobiography, Curcio says he always had other talents, particularly as a healer and psychic. One October morning in 1995, his life changes forever when he pauses beneath a banyan tree while riding a golf cart across his 10-acre Jupiter Island oceanfront estate. From out of the blue—and out of the author’s own mouth—God speaks to him, asking if he is ready to fulfill his purpose as a divine servant. It’s the dawning of a new day, as referenced in the title. So, Curcio embarks on a fantastic—arguably a bit too fantastic—journey of metaphysical discovery that, he says, is now more open than ever for all humanity to join. His path leads him to the Great Pyramid in Egypt to the healers and channelers of Brazil and elsewhere, and ultimately to Delphi University of Spiritual Studies in Georgia, where he’s a director and teacher. Along the way, he leaves his wife and children for his teacher and soul mate, a striking blonde with exceptional psychic credentials whose entry into Curcio’s life had been foretold to him. Curcio doesn’t merely believe in what the earthbound would call miracles; he witnesses and performs them frequently and even suggests that his healing work extends to curing the gravely ill and raising the dead. A chapter entitled “Signs and Wonders” begins with the author’s bare back to the sun as he absorbs what he calls the Christ energies, “which many believe emanate from the Sun.” This spiritualist path will be a revelation to the uninitiated, as will many of the book’s other esoteric, believe-it-or-not pronouncements. Gratuitously over-the-top asides may further raise doubts about the veracity of the whole. In one example, Curcio says he can send love over telephone lines, such that loved ones on the other end feel their receivers warming from the abundance of love energy. The latter part of the book is pure Christian–Eastern mystic theology, where explanations of reincarnation and karma appear to show clear understanding of these theories. Why did God come out of the void in the first place? As He tells Curcio, “Charles, I just couldn’t contain my Self.”