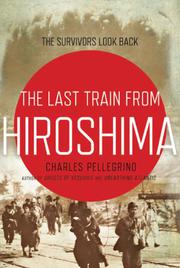 THE LAST TRAIN FROM HIROSHIMA

The Survivors Look Back

Stories of people living in Hiroshima and Nagasaki in 1945 when the atomic weapons detonated, interwoven with accounts of the U.S. pilots who flew the planes and dropped the bombs.

Pellegrino, who has written before about the connections between cataclysmic events and human beings (Ghosts of Vesuvius: A New Look at the Last Days of Pompeii, How Towers Fall, and Other Strange Connections, 2004, etc.), here chronicles history’s most destructive attack by human beings on others of their species. Although he struggles mightily not to place blame, near the end he skims swiftly through the grim fates and shortened lives of some of the Japanese victims, then notes that pilot Paul Tibbets died “of natural causes in 2007, proud of Enola Gay’s role in history.” The author begins in Hiroshima, where the first bomb actually misfired, creating an effect that was much less devastating than the bomb’s creators had predicted. Nagasaki’s bomb, by contrast, did what it was supposed to. Pellegrino, a trained scientist (though not a physicist), ably communicates the inner workings of the bomb and the horrific effects created when what the Japanese called the pika-don (flash-blast) occurred. The author includes stories of instant and total devastation—people vaporizing, buildings disappearing—and improbable survivals and bizarre effects: permanent human shadows cast on walls; a teacher whose face bore the imprint of a student’s writing she was examining when the flash came; a man whose eye problems were cured, another whose cancer went into remission; a little girl who folded more than 1,600 paper cranes before her fallout-induced leukemia killed her. Pellegrino also discusses the unlucky/lucky few who endured and survived both attacks—and one who lived to witness 9/11 as well. The author interviewed survivors, read every relevant text and keeps the many names and places achingly clear in readers’ minds.

Enormously painful to read, but absolutely essential to do so.