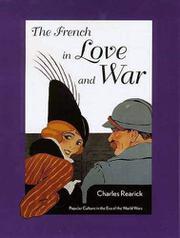 THE FRENCH IN LOVE AND WAR

Popular Culture in the Era of the World Wars
by Charles Rearick
BUY NOW FROM
AMAZON
BARNES & NOBLE
GET WEEKLY BOOK RECOMMENDATIONS:

 A competent survey of 30 years of Gallic mass culture that speeds along like a newsreel through the Great War, the Roaring '20s, the Depression, and the Vichy years. Between Verdun and Vichy the French people's famously self-assured sense of identity buckled under anxious modern times, as Rearick (History/Univ. of Mass.) shows in these annals of their entertainments. During this gradually dispiriting era, the petit peuple (little people) got by in part with the help of the music hall, the dance parlor, and the cinema, all exemplified by the likes of Maurice Chevalier, Josephine Baker, Jean Gabin, Edith Piaf, Mistinguett, and the comic singer Georgius. Chevalier comes across as the representative star of this book: serving as an ordinary soldier (poilu) in WW I, attaining celebrity with carefree charm mediated by his working-class background, emigrating to Hollywood, then returning to entertain the French troops just before the Nazi blitzkrieg. Rearick begins with the cultural myths of WW I, analyzing the poilus' reputation for gaiety under fire, their anthem of their favorite bargirl, ``Quand Madelon,'' and the Cult of the Fallen after the hard-won Allied victory. After the Great War the French identity felt pulled in opposite directions: toward modernity, such as the American-influenced Jazz Age, and toward nostalgia for old France (even, in Piaf's songs, for Paris's apache pimps and molls). This fissure erupted in the '30s between LÇon Blum's socialist government and reactionary political movements, though Rearick speeds through this period and the Vichy regime without as much reflection. And while his emphasis is admittedly on the ascendancy of the little people and their culture, he could have expanded on his themes by referring to other works, such as the novels of CÇline and some films by Vigo. Nonetheless, he has more than enough other sources to make a rich and populous popular history. (125 illustrations, not seen)

HOW THE FRENCH THINK
by Sudhir Hazareesingh
Newsletter sign-up