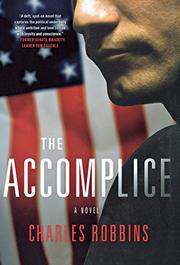 Having possibly cost his previous candidate an election, Henry Hatten thinks he's lucky to land a job as press secretary for presidential contender Tom Peele, a moderate Republican senator from Nebraska with Kennedy-esque looks and charm. But what Hatten has landed in is a world of trouble.

Great on issues, Peele is a disaster waiting to happen with his chronically compromised ethics and womanizing ways. That disaster takes the form of Elizabeth, an ill-fated Iowa State professor with whom both Peele and Henry have an affair. Henry, who thinks getting stuck in Iowa in the weeks leading up to its electoral caucus is a fate worse than death, revises his outlook when a politically motivated killing victimizes Elizabeth, and he becomes a prime suspect. Robbins, a former reporter who was Sen. Arlen Specter's communications director (he co-authored Specter's 2012 memoir, Life Among the Cannibals), deftly combines a lively insider's look at campaign politics with a satirically spiked murder story. He reveals how easy it is for even a principled candidate like Peele to compromise his values—not to mention the values he promoted playing teen idol Ranger Rick on the TV series Parkland—for political support. And we see how many opportunities he has to compromise his marriage. Robbins stocks his impressive first novel with great characters, including cutthroat campaign chair Gil Cass, aka "The Angel of Light...one of Satan's disguises," threatening union leader Ed Zabriskie and linebacker-sized security chief Mike Sterba. The narrative flows freely and easily, the dialogue crackles, and the comedy comfortably coexists with the drama.

Perfectly timed for the 2012 election, this book sets itself apart from most political thrillers with equal parts insight and imagination.