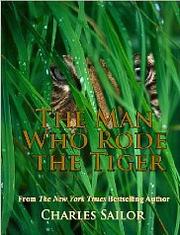 THE MAN WHO RODE THE TIGER

In Sailor’s thriller, a father seeks to liberate his daughter after she’s accused and tried for capital crimes in China.

Retired police captain David Kettering learns that his daughter, Sarah, a correspondent for Global News Network, has been charged with espionage in the assassination attempt on the general secretary in Beijing. That information is a mere courtesy: The United States is denying any association with Sarah, whom China believes to be an American agent. Members of a “democracy club” are also arrested, but the conspiracy runs even deeper—China’s president is poisoned, an attempt on his life that he believes was instigated by the general secretary. David, Sarah and others, including GNN comrades, are bugged and shadowed by agents of the Ministry of State Security, while David learns just how far he’ll go to save his daughter. Sailor (The Second Son, 1979) dives right into the story, as David travels from the States to Beijing in little narrative time. There’s little attempt to establish the relationship between father and daughter before the plot begins; the imprisoned Sarah is introduced in shackles. But their solid connection is well developed through their brief encounters and David’s unfaltering belief in her innocence—“My daughter is not now, nor has she ever been, a spy,” he boldly proclaims in court. Sailor’s writing style is unassuming, as he spends less time painting the scenery than relaying information, which comes in streams but suppresses enough details to maintain a flow of curiosity. Hoping for help in getting his daughter back to America, David spends a large portion of the novel tracking down the ambassador in the U.S., although he typically finds himself immersed in kinetic gunfights. Sarah, despite her mistreatment in prison, proves just as resolute and sturdy a character as her father. The story is further enriched by a clear struggle between communism and democracy (a political demonstration has a bloody conclusion), but Sarah’s trial is the most rousing part, particularly when watching her lawyer jump hurdles in the courtroom.

The solid plot is nearly outshone by its sterling leads, the father–daughter duo that refuses to compromise.