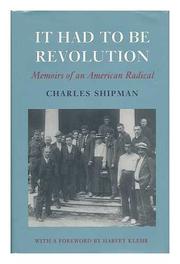 IT HAD TO BE REVOLUTION

Memoirs of an American Radical

A priceless Old Left memoir by Shipman (1895-1989), who began as a student activist and became a founding member of the Mexican Communist Party and an intimate of leftists and literati around the globe. Writing from retirement in Texas during the Bush Administration, Shipman—then in his 90s but still taking college courses—tells a story that spans the decades from Wilson to Reagan. As a child, he says, he was so wild that he was sent to a boarding school at age five and didn't come home until he was ready for high school. Launched by Walter Lippmann into a delayed college career at Columbia, the author became a member of Henry Ford's bizarre ``peace-ship'' contingent prior to WW I, as well as a friend to Lorenz Hart, Bertolt Brecht, and the Mankiewicz brothers. Son of a Jewish father who changed both his name and religion, Shipman was a classic rebel and idealist, as well as a tremendously resourceful man who, even while toiling for the CP, worked at various times at The Wall Street Journal, Standard and Poor's, and Dow Jones. Hounded out of the US as a conscientious objector (his father supplied decisive testimony), Shipman fled to Mexico, where he assumed the first of many identities and met everyone from boxing champ Jack Johnson to the legendary Russian diplomat/agent Michael Borodin, who sent him to Haiti to track down a missing courier and a mysterious suitcase. The intrepid author retrieved both, thus becoming Borodin's assistant. Travelling the world for Communism, he ended up associating with Lenin, John Reed, Trotsky, et al. But Shipman couldn't stomach Stalin and, in 1929, he was expelled from the Party for ``petit-bourgeois'' tendencies— although he remained a radical. The story of a shrewd, observant, daring, and hardheaded man who always gravitated to interesting people and issues: both an autobiographical cliffhanger and an important historical document. (Nineteen b&w photographs)