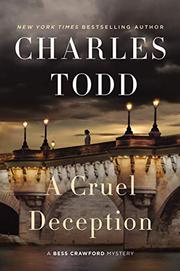 Five months after the Armistice, nursing sister Bess Crawford (A Forgotten Place, 2018, etc.) gets yet another painful reminder that for all too many, the Great War has never ended.

Plucked from her clinic in Wiltshire, Bess is volunteered by Matron Helena Minton for a very personal errand: to travel to Paris and ascertain why the Matron’s son, Lt. Lawrence Minton, hasn’t appeared for weeks at the peace talks to which he’s been assigned as a minor attaché. Is he still suffering the aftereffects of the wound he got last October? Has he become dependent on the drugs given him to fight the effects of his injury? Matron wants to find out quietly without pursuing the official inquiries that could end her son’s army career with the regiment of Bess’ father, Col. Richard Crawford. Arriving in France, Bess follows Lawrence’s trail to the village of St. Ives, where he’s living with schoolteacher Marina Lascelles, a family friend whose father’s life he once saved. Bess immediately sees the signs of his addiction to laudanum, a debilitating appetite that’s clearly incapacitated him for diplomatic service. She’s even more concerned when she realizes that the reason he started taking the drug was to escape his crippling sense of guilt over yet another of the wartime traumas in which Todd specializes. After many episodes of conflict, self-torment, and uncontrollable behavior, Dr. Michel Moreau, Bess’ nominal host in Paris while she secretly takes up residence in St. Ives, suggests the radical step of hypnotizing Lawrence to recover the searing memories he’s suppressed. Lawrence proves a ready subject, but several sessions only gradually reveal the story of “the angel” that’s been tormenting him, and even once he’s revealed the story, the truth behind it remains to be disclosed.

Sensitive, beautifully written, disconcertingly familiar in all but the circumstantial details of the underlying horror, and much too long.