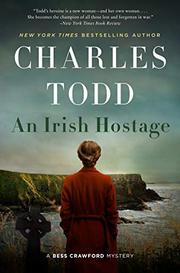 In 1919, a trip to a friend’s wedding reminds Bess Crawford once again that hatred doesn’t come to an end when war does.

On leave from Queen Alexandra’s Imperial Military Nursing Service, Bess is free to travel to Ireland to serve as a bridesmaid for Eileen Flynn, another nurse whose leg she helped save from amputation. It’s clear that venturing across the Irish Sea will be anything but routine. Instead of taking trains and motorcars subject to hijacking by nationalist fanatics, Bess asks American pilot Capt. Arthur Jackson to fly her to tiny Killeighbeg, where all is in readiness except for the groom, Michael Sullivan, who’s presumably been abducted by members of the Rising in retaliation for his wartime service to the Crown. But Bess doesn’t need to venture outside Eileen’s home to find furious conflicts raging. Granny Flynn seems to hate Eileen, whose mother is Anglo-Irish, as much as she hates Bess, and Eileen’s cousin Terrence Flynn, a Rising star, suggests that the bride made her own bed when she chose an Englishwoman for her bridesmaid and her intended chose an English officer, Maj. Ellis Dawson, as his best man. Days after local painter Fergus Kennedy turns up coshed to death, Eileen decides to forge ahead with her preparations for the ceremony in case the groom happens to show up, and a half-dead Michael appears in a superb theatrical stroke that confounds plausibility and logic. No sooner has Bess packed him off to bed than Ellis Dawson disappears. It’s enough to make you wonder who the title refers to: Michael, Ellis, or Bess herself.

The mystery is peripheral to this worm's-eye view of the struggles that tore the Emerald Isle in two.