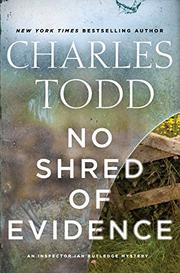 NO SHRED OF EVIDENCE

In the Cornish town of Padstow, Victoria Grenville is entertaining her neighbor Elaine St. Ives and two visitors from London for an autumn weekend. A row on the River Camel seems like a lark until they see Victoria’s would-be suitor, Harry Saunders, in trouble in his own boat. What appears to be a well-intentioned rescue attempt, with the four women helped by young farmer Bradford Trevose, goes awry when Harry is hit with the oar, and Trevose accuses the young women of attempted murder. When the first detective on the case dies of heart failure, Grenville, the local magistrate, calls in Scotland Yard, which sends Inspector Ian Rutledge. Rutledge is shocked to learn that one of the accused houseguests is Kate Gordon, his ex-fiancee’s cousin. Much as he admires Kate for her sense and courage under pressure, Rutledge has to be impartial, especially with Harry lying in a coma and his parents clamoring for justice. The only motives Rutledge can imagine are class resentment on Harry’s side and bitterness about the victim’s easy berth during World War I from the Grenville and St. Ives families, who suffered terrible losses. Even Rutledge’s invisible familiar—the voice of a fallen wartime comrade—is mostly silent. Then Mrs. Grenville tells Rutledge about a past tragedy that could explain why Trevose blames the young women for Harry’s coma and ultimately his death. Without real evidence or the missing notes from the first detective, Rutledge’s investigation is as nebulous as the rumors of a local spirit. Then a second assault takes Rutledge in a new direction and into serious danger.

The haunted detective is as thorough as usual, though he’s dealing with faster-moving events than in some of his previous adventures (A Fine Summer’s Day, 2015, etc.). There’s no peace for the man and only a teaser of romantic feelings he scarcely admits.