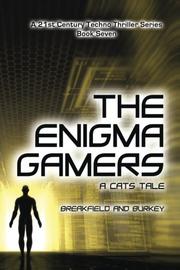 From the Enigma series, volume 7

In this spinoff of Breakfield and Burkey’s (The Enigma Always, 2015, etc.) techno-thriller series, someone’s hacking companies and places with automated services and demanding ransoms.

Julie Rodríguez plays her part in family-run information/security organization R-Group, but her latest job is being handled by her own Cyber Assassin Technology Services. CATS is keeping an eye on a number of hacked computer systems and corresponding demands for money. There may be a pattern, as each incident involves tampering with an automated process. The Consortium of mines in Australia, for example, loses control of its digital mining equipment, while U.S. airline Fast Flyers’ fully automated flight service confronts problems like a website erroneously promising free travel. Julie and her pilot husband, Juan, dispatch CATS members around the globe, including Brayson Morris, who’s in Spain to help Baby Perez, mayor of the ultramodern, digitized Smart City. Meanwhile, the persons behind the cyberattacks are, it seems, little more than gamers—Russian Dmitry Vasnev and Chairman Chang in Macau, China—engaged in a serious competition on their respective supercomputers. The CATS team tries to regain access to the machinery or networks but is encumbered by people’s willingness to abide by the hackers’ ultimatums. Julie and company race to track the source as the ransom deadlines approach. The authors wisely chose cyberassassin Julie as a focus, as she’s one of the series’ best characters. Though it’s a bit disappointing that she doesn’t get more of the spotlight, the story provides excellent coverage of the hacked systems and the team’s varying degrees of success—one business pays the ransom and effectively terminates its contract with CATS. An unmistakable distinction from preceding books is evident, primarily a lighter tone. There’s concentration on Julie and Juan’s intimacy, for example, as well as relative distance between Dmitry and Chang’s game and its real-world consequences. Still, grim events build anticipation; a crew’s work on nonoperational vehicles proves lethal, and even Juan faces trouble, with his plane losing a battle with a hijacked drone. Readers returning to the series will appreciate recognizable faces, while the authors’ comprehensive back story gives newbies a warm welcome.

A cyberattack tale that’s superb as both a continuation of a series and a promising start in an entirely new direction.