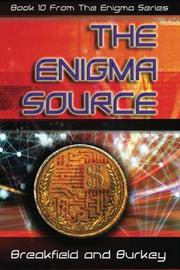 From the Enigma series, volume 10

When there’s a security breach at the Global Bank, Interpol enlists the help of the R-Group in Switzerland, which specializes in cybersecurity. But the bank also needs assistance in getting control of assorted cryptocurrencies on the market after the appearance of a brand-new digital medium of exchange. Seeking additional help, Global Bank separately contacts Petra Rancowski, descendant of one of the R-Group’s founders. Other groups want to implement the new currency, as well, including a Chinese terrorist group that goes after R-Group associate Su Lin and her husband, Andy Greenwood. Once a part of the Chinese Cyber Warfare College, Lin created a particular type of cryptocurrency code. Combat-trained Mercedes Field of the Cyber Assassins Technology Services team (prominently featured in other series installments) essentially becomes Lin’s bodyguard—and soon, she must deal with an abduction. Meanwhile, Petra; her love interest, Jacob Michaels; and R-Group hacker Quip enter the cryptocurrency war by developing their own digital product while R-Group Financial Director and Jacob’s grandfather Wolfgang Mickelowski struggles with a grave illness. Breakfield and Burkey excel at efficiently recapping earlier events and character histories while also delivering a fresh story. The pace is unremitting throughout, aided by the authors’ use of very short scenes and chapters. Wolfgang’s ailment provides this entry with some tender moments as well as a further peek into the R-Group backstory; Jacob discovers books, written by Wolfgang, that tell of the organization’s possible origin. As in preceding entries, the technological jargon is both modern and comprehensible, and the abundant humor never sidetracks the narrative; one advertisement for Petra’s new currency, for instance, is amusingly flashy: “We broker 1’s and 0’s at digital speed for peace of mind!”