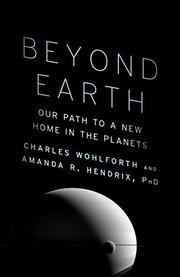 Our Path to a New Home in the Planets

An assessment of the prospects for establishing a future space colony.

While this is not yet on the radar screen, Wohlforth (The Fate of Nature: Rediscovering Our Ability to Rescue the Earth, 2010, etc.) and Hendrix, a planetary scientist who worked at NASA’s propulsion laboratory, believe that such a long-term goal is needed to provide a focus for NASA, which is currently massively underfunded. As they note, “even an imaginary space colony decades off would provide a goal, a lodestar, to help align mission planners’ designs to the future.” The authors also explore the commercial potential for financing such a mission, beginning with space tourism. Saturn’s moon Titan appears to be the best candidate for such a colony because of its Earth-like environment and available energy. Apart from Earth, it is unique in the solar system in having surface liquids. Venture capitalist Elon Musk, the founder and owner of SpaceX, is a central character in this story. The mission of the company is to mass-produce rockets “fast, reliably, cheaply, and get them to space right now,” following the model of car manufacturers. The authors admit that the company is attempting to implement technologies first developed by NASA but with major cost reductions. In their opinion, the difference is Musk’s entrepreneurial spirit, in contrast to NASA’s bureaucracy—although like NASA in the aftermath of the Challenger explosion, SpaceX is facing financial problems. Aside from technological issues that are still to be resolved, a more serious problem is the potential physical danger to astronauts—e.g., the effects of cosmic radiation and weightlessness over long time periods. The authors successfully combine a visionary approach to space colonization with the practicalities facing the program now. Their conclusion that NASA should focus on “stretch technology,” leaving the rest to the private sector, is controversial but worthy of serious consideration.

A welcome contribution to the ongoing discussion of the future of America’s space program.