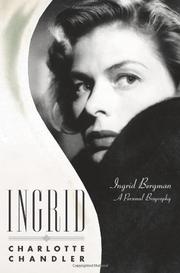 A haphazard assemblage of interviews with Bergman and her friends, family and directors.

Liv Ullmann piques curiosity when she recalls shouting matches between Ingrid Bergman and director Ingmar Bergman during filming of the former’s final film, Autumn Sonata. “[P]eople say she was very tough in Hollywood,” Ullmann adds. Little evidence of Ingrid Bergman’s allegedly flinty temperament exists elsewhere in this latest from Chandler (The Girl Who Walked Home Alone, 2006, etc.), part of a series of star biographies based, she reminds readers repeatedly, on her own interviews. Bergman reflects with equanimity on three marriages, film and stage careers in Stockholm, Hollywood and Europe and a tumultuous break from the United States when she left her first husband and daughter, Pia Lindstrom, to pursue an affair, then marriage to Italian film director Roberto Rossellini. A daughter of the second marriage, Isabella Rossellini, speaks adoringly of her mother. Not heard from here is Lindstrom, who once testified she did not love her mother, a fact Chandler doesn’t mention. As for Bergman’s career, Chandler writes straight plot summaries of Bergman’s films and plays, but provides scant critical insight into her acting. Of Bergman’s work in Intermezzo (the film that launched her career), in Anastasia (the film that garnered her an Oscar and that may have softened and reclaimed American audiences indignant over her personal life) and in Hitchcock’s Notorious (a career highpoint), Chandler observes virtually nothing. Profiles of Bergman’s first husband, Peter Lindstrom, apparently as rigid as the forbidding husband in Ibsen’s A Doll’s House, and Robert Capa, the self-destructive photographer with whom Bergman had an affair, lend some interest.

Among several other books about Bergman, including her own autobiography, this one seems a series of outtakes.