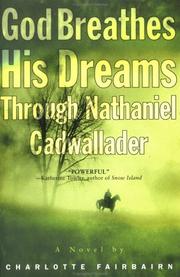 Heavily pregnant, young Megan Capity gazes into a “swanny-pool” and sees all sorts of things: her village covered in drifts of snow, a lone, broad-shouldered horseman on a brown stallion, herself as an aged woman. . . . Will her unborn babe, the spawn of rape, prove bane or boon? Will Shiny Blackford, a village lad, love her forevermore, or will the handsome stranger heal her heart? Only time will tell, intones this first-time British author in convoluted, repetitive, generally overwrought prose. And who is the stranger anyway? Well: “The mountains whisper to you and the trees whisper to you and the birds and the bees and even Daisy and the lambs and the sheep and the deer that live in the spinney all whisper to you that his name is Nathaniel Cadwallader.” Then there’s Tom Sebley, a nettle among dandelions, the loquacious leader of the villagers, who must serve perforce as an earthy counterbalance to the mystical man on the horse. Untroubled, Nathaniel sets to work at his appointed task at the humble church. For he’s a Christlike figure, a spiritual carpenter who soon carves, for every person in the village, a talisman that expresses the truest qualities of their hidden souls. For the priest, Father Duncan, he carves something of no particular shape or substance, but we know that it signifies the Word of God. Hey, look ye well! Megan’s daughter Myfanwy has grown up in the twinkling of an eye to become a headstrong beauty, and she weds Nathaniel amid whispering and even a little muttering from those who dwell upon the sunny hills and deep within the bosky dales. Then, quicksilver, a wolf on his prey, Tom Sebley pounces on the girl and has his way with her, though she scarcely protests, and she a married woman, cluck the townsfolk in the tavern.