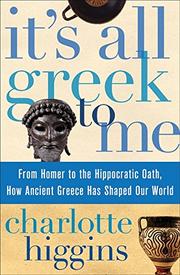 IT’S ALL GREEK TO ME

From Homer to the Hippocratic Oath, How Ancient Greece Has Shaped Our World

An animated, sometimes breathless, hyperbolic cruise across the Aegean of ancient Greek history and culture.

The Guardian arts correspondent Higgins (Latin Love Lessons, 2007), whose enthusiasm for the classics began at Oxford, presents an effervescent text that’s initially affecting but eventually becomes affected. “Homer is a rip-roaring read,” writes the author, Oedipus the King is “the greatest detective story” and Herodotus’ Histories “one of the most wonderfully entertaining, enlightening, exciting books you could have the good fortune to pick up.” Still, the book has plenty of useful aspects, perhaps most notably in the rich back matter, comprising an alphabet, map, timeline, key to important Greek gods and notables and a sampling of Greek sayings and words (and root words) that still inhabit our language (tantalizing, Draconian). Anyone reading The Iliad or any other of the Greek classic texts for the first time would do well to keep the section bookmarked. Higgins covers Homer, the playwrights, the historians, the nascent scientists and the philosophers, and she gives special attention to the warriors, wars and other aspects of the ancient world that continue to make us uncomfortable—e.g., homosexuality, women’s rights, slavery. Periodically, she pauses to offer mini-disquisitions on topics as varied as the plots of The Iliad and The Odyssey, the architecture of the Parthenon and the uneven verisimilitude of the 2007 film 300. Higgins wisely notes that speaking collectively of “the ancient Greeks” is misleading because there were hundreds of independent city states in the region at the time. Wars and invasions temporarily unified them; civil wars bloodied and weakened them. Though the author praises the Greek thinkers effusively, she also notes that they got quite a bit wrong—as when Aristotle confidently described how bison spray pursuing dogs with projectile dung.