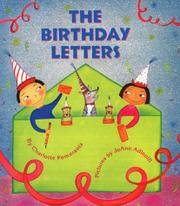 Despite some funny touches, Pomerantz's story of the tedious bickering between two kids gets hoist on its own petard. Tom wants to have a birthday party for his dog Louie. He sends out invitations to his friends Lily and Pedro, and to Pedro's sister Emilia. Emilia writes back that she and her gerbils would love to attend. (Actually, Pedro writes, and reads, everything for Emilia, though only after Emilia likes to pretend she is doing him a favor.) Tom says no gerbils; he evidently wants Louie to have the limelight. The two set to quibbling via the mail—Emilia calls Tom the world's meanest potato head (comically rendered by Adinolfi, who draws Tom as a lumpy head full of eyes) and he refuses to relent. Emilia appeals to Tom's better half, but Louie, since Tom is doing the writing, says no to the gerbils. Finally comes the day of the party when Emilia just shows up, with a big steak bone hidden in her dress. This drives Louie crazy. It looks to Tom like Louie can't live without Emilia, so she gets to stay. But since she doesn't have the gerbils in tow, the victory has a hollow ring. And really, who needs more frivolous arguments in their lives? Adinolfi's artwork, though hip and darting and with an eye for any humor that can be wrung from the text, ultimately can't keep the dreary story afloat. (Picture book. 5-7)