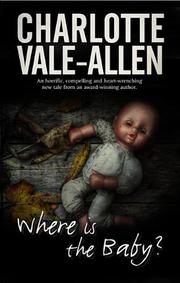 WHERE IS THE BABY?

Does the dark past of three characters justify their present actions?

When Officer Brian Kirlane meets lost child Humaby—an unfortunate contraction of “hump baby” coined by her abductors—he’s immediately charmed by the fact that she’s worked to rescue a baby abducted by the same kidnappers. Crime photographer Connie Miller, brought in to record the evidence, feels the same way. So when Humaby’s parents can’t be located, both Brian and Connie put in with the Department of Children and Families as potential foster families. Unfortunately, the caseworker assigned to Humaby decides the best interests of the girl demand that she live with newly minted child psychiatrist Stefan Lazarus, who’s overwhelmed by his own experience. Years later, Humaby has become Faith, searching for the baby she helped rescue when she was a child, her own place in the world and escape from the Lazarus family. Around the same time, Natalie “Tally,” freed from prison, drives east to nowhere in particular, hoping for a new beginning. In Connecticut, she strikes up a friendship with local Hayward “Hay” Baines, and the two feel an immediate connection that transcends the short time they’ve known each other. When Faith realizes that her story intersects with Hay’s and Tally’s, the three allow their shared past to dictate actions that may jeopardize their futures.

Inspired by real events, Vale-Allen (Parting Gifts, 2001, etc.) invents a compelling back story for her characters that makes for a real page turner.