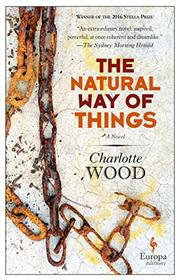 THE NATURAL WAY OF THINGS

An engrossing novel set in the barren Australian Outback in which women are held captive, victims of a violently misogynist system.

Wood's allegorical novel—her first to be published in the U.S.—is at once brutal and beautiful. Imprisoned in a desert holding, surrounded by electric fencing, sleeping in dank doghouses, filthy, starving, and beaten, 10 girls struggle to keep alive and keep sane. They have been drugged and abducted, accused of licentiousness. Their sexuality has been criminalized; they have slept with the wrong man or have been raped or have resisted rape, and for these incidents have been shorn, shackled, and shamed. When the power goes out everywhere but the fence and it becomes clear that no one is coming to release them—or their guards—they must live by whatever remains of their own strength, dedicated “to the one quiet, animal triumph: survival.” Yolanda and Verla, leaders of this desperate and dehumanized group, become hunters—for sources of life and of death. Surreal yet intensely vivid, the novel is disturbing and enthralling. It makes its point—that “it was men who started wars, who did the world’s killing and raping and maiming”—plainly, just short of perfervidly. Haunting, imaginative language brings the characters’ madness and suffering to life.