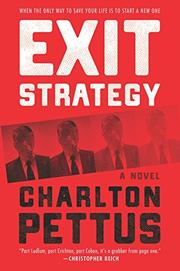 A fast-paced, hemisphere-spanning debut thriller about the downside of starting a new life.

At a conference, Dr. Stephanie Parrish eulogizes her late husband, Jordan Parrish, a Harvard scientist and founder of medical technology company Genometry, who had “dreamed of a world without disease.” Stephanie was told that her husband had been having an affair and that he and his girlfriend died in an accident. She accepts that he’s gone, “dead and buried, mourned after a fashion.” But there was no affair; worried about his finances and his shaky marriage, Jordan had contacted Exit Strategy, which helps people disappear and start new lives for a fee. Meanwhile, a huge insurance payoff ensures that Stephanie and Genometry are financially much better off with his death. The folks at Exit Strategy take their mission seriously—they will kill Jordan and his family if he contacts anyone he knows. But Jordan doesn’t want this situation (he must not have read the fine print), so he desperately looks for a way out as he’s assigned the job of teaching English in Japan. Exit Strategy inserts a device they call “The Angel” into his hand to track his every movement, and when he carelessly “likes” a photo of Stephanie on Instagram, he fears his family will be killed. His escape attempt takes him to the Middle East and to the Chunnel, where he must fight his way to England. Meanwhile, Stephanie learns Jordan is alive, and she wants him back. Lots of blood flows, as does semen in a weird sex scene. Later, a needless oral-sex encounter is surprising given the participants. And there’s an especially grisly and gratuitous cat murder. It’s clear why Exit Strategy wants to maintain client confidentiality, but these dudes must have murder in their business plan. They won’t last long if they have to go to such trouble for every straying client. But the writing is generally good, with plenty of tension and over-the-top action as the protagonists struggle against heavy odds to reunite.

An enjoyable read but hardly the stuff of legend.