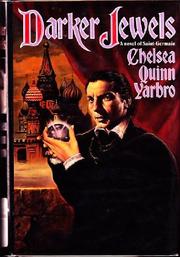 Another of Yarbro's historical fantasy novels about the immortal vampire Count Saint-Germain (Out of the House of Life, 1990, etc.). Here, in 1586, Istvan Bathory, the Transylvanian King of Poland, disturbed by the threat of the Ottoman Turks to the south, sends an embassy to Czar Ivan (the Terrible) of Russia, with a view to exploring a possible alliance. The embassy will be led by Istvan's fellow-countryman Ferenc Rakoczy (Count Saint-Germain) and will include eight Catholic priests headed by the grim, suspicious Father Pogner. Rakoczy, thousands of years old and with many acquired skills, practices alchemy to create the dark gemstones that please the Czar—the latter unfortunately has gone mad with grief and guilt after he killed his eldest son in a fit of rage. As the Russian nobles plot against the Czar and each other, and attempt to subvert the Polish embassy, Rakoczy finds it increasingly difficult to conceal his true nature; yet, forced by the Czar's order to wed Xenia, a disgraced and traumatized Russian noblewoman, he expends infinite care and tenderness upon her. Finally, after Ivan dies and is succeeded by his half-witted son Feodor, Rakoczy is unable to prevent the triumph of his enemies. Excellent on intrigue and period detail, far less convincing on consequences and action. Overall: dense, intermittently absorbing, less than fully satisfying.