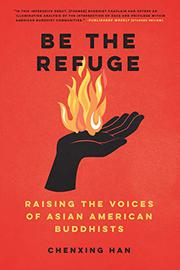 Han’s debut book, which began as her master’s thesis, might have languished as a sociological study for academics if not for the advice of novelist Ruth Ozeki, who told her, “Make it an account of your curiosity. Put yourself in.” Han does exactly that, intertwining scholarly methodology with the story of why she was compelled to take on the subject. Han belongs to the 2% of Asian Americans who have become Buddhist after being raised outside the tradition—in the author’s case, as an atheist. By contrast, 10% of Asian Americans who were raised Buddhist leave the faith. This math exists in the context of American Buddhism’s public image already skewing heavily White. Han cites the popular distinction between “two Buddhisms.” One is viewed as rational, focused on meditation, nonreligious, and White; the other is cultural, traditional, based on ritual, and Asian. “It’s not hard,” writes the author, “to guess which group is more likely to be dismissed as ‘superstitious’ and which group is more likely to be celebrated as ‘scientific.’ ” Anyone who follows mainstream American Buddhism knows which group is at the cultural fore. Han demonstrates convincingly that this is a misrepresentation of the actual demographics within American Buddhism, which is more diverse in terms of both race and denominations than is usually recognized. However, the author isn’t content to settle for scholarship; she wants to advocate on behalf of better representation. Is this discrepancy due to anti-Asian racism or based on an American interest in those aspects of Buddhism that can be easily extracted from their cultural contexts and incorporated into a Western worldview? This is an ongoing debate, to which this book is an important contribution, but not the final answer.

An eye-opening read for anyone under the false impression that American Buddhism is primarily the province of Whites.