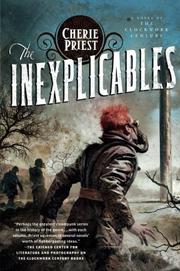 Another in Priest’s Clockwork Century series (Ganymede, 2011, etc.), set in a late-Victorian alternate America where the Civil War never ended, whose chief ingredients are steampunk, supernatural and pulp Western.

Orphan Rector Sherman has reached his 18th birthday and so must leave the orphanage. He isn’t particularly sad to go, having made a living as a dealer in the drug “sap.” Unfortunately, he’s addicted to the drug himself and haunted by the ghost of Zeke Wilkes, whom he helped sneak into the walled-off city of Seattle and who almost certainly is dead. To lay the ghost, Rector must enter Seattle himself—a fearsome undertaking, since the city is full of a corrosive yellow gas (the raw material from which sap is derived) and swarming with zombies, or “rotters.” Once inside, Rector runs into the Doornails, a mixed-race group who are trying to make the city livable, and learns of another faction led by gangster and drug dealer Yaozu. He’s chased by a gigantic apelike creature, rarely glimpsed, that the locals refer to as an “inexplicable.” And he makes a couple of friends: puppylike Zeke, who’s neither dead nor resentful, and young Chinese know-it-all Houjin, who see to it that he acquires the necessary gas mask and gloves for protection against the gas. Less happily, he’s summoned by Yaozu, who knows of Rector and his previous business. Yaozu is concerned that the rotters are disappearing, and if the rotters can get out, others—creatures, people—can get in, and Yaozu has no wish to fight off a succession of gang lords coming up from California. This gritty, intensely realized setting isn’t backed up by a similarly robust plot, and readers not partial to mouthy teenagers will find few other characters with any depth.