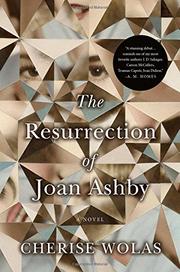 THE RESURRECTION OF JOAN ASHBY

A literary prodigy allows her husband to convince her to reverse their decision not to have children.

Can you be a mother and also be an artist—or, by extension, pursue any serious ambition at all? This is the question taken up with urgency and all due complexity in lawyer and film producer Wolas' debut novel. The book opens with a hugely laudatory magazine profile of a fictional writer named Joan Ashby, revealing that at age 13 Ashby articulated nine rules for herself. No. 7 was “Do not entertain any offer of marriage,” and No. 8 was “Never ever have children.” Then, the article explains, after having taken the world by storm with two story collections, Ashby got married and became pregnant at 25—and that was the last she was heard from for nearly three decades. After revealing this much, and providing reprints of two of Ashby’s famous stories, the article cuts off with this line: “Continued after the break.” The “break” is a 500-plus–page narrative exploring Ashby’s struggles during these decades. It’s a tribute to Wolas’ plot that most of it cannot be decently revealed. And heaven knows, a book this big needs its plot. Wolas provides not only the main story, but several more excerpts from Ashby’s work. Maybe she goes a little too far with these digressions, but even in a scene where Ashby is teaching a writing class and the first lines of a dozen student stories are included—they're all great first lines! Like John Irving’s The World According to Garp, this is a look at the life of a writer that will entertain many nonwriters. Like Lauren Groff’s Fates and Furies, it's a sharp-eyed portrait of the artist as spouse and householder.

From the start, one wonders how Wolas is possibly going to pay off the idea that her heroine is such a genius. Verdict: few could do better.