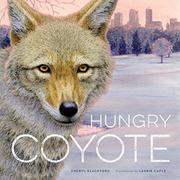 This masterfully illustrated appreciation follows a coyote that lives near a lakeshore in an urban park through four seasons of hunting for food for himself and his family. Extensive alliteration and the repetition of phrase patterns characterize a text that reads like poetry and describes the activities of the coyote and those of the oblivious children playing in the park. During a summer storm, for instance, the children “jump, twirl, and umbrella-whirl,” while the coyote “herds his playful pups to shelter.” There are sounds and smells and surprising sensory imagery: “Wind whirls autumn’s litter into rustling piles.” Coyote’s foraging is not always successful. He tries and fails to catch a vole. But he grabs sausages from a summer picnic, and in the fall, he catches an old Canada goose to feed a family that now includes six growing pups. Usually foregrounding the coyote, Caple’s realistic paintings also document the changing seasons, from midwinter to winter’s onset again. Each spread has a few lines of text; occasionally an onomatopoetic sound word swoops across the image. One icy blue spread is nearly empty; the coyote “howls for spring” in the distance. His is not an easy life, and readers will come away with sympathy and appreciation.

A beautiful tribute to a much-maligned animal with which we share our world.