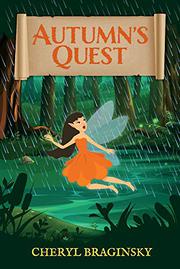 A young fairy princess must defend her kingdom from a cruel rival.

Braginsky’s debut middle-grade novel introduces the world of Golden Wood, a magical place governed by miniature fairies and inhabited by sentient animals. One stormy day, Princess Autumn Primrose hurries home after tending to a grove of saplings. The cold raindrops and violent winds become the least of her worries when she is abruptly attacked by a boggart, a wicked creature capable of assuming many shapes. Fortunately, she is soon rescued by a dashing elf warrior named Capt. Lanceleaf Cottonwood. After ensuring her safety, he delivers a dire message. An evil fairy named Azara, who once enslaved the inhabitants of Golden Wood and forced them to mine gold and other precious materials, has escaped from her prison on Ice Mountain. Autumn’s grandmother managed to defeat Azara many years ago, but not before Autumn’s parents were killed in the rebellion. Now, the time has come for Autumn to face Azara herself. In order to match the wicked fairy’s power, she must first complete an ancient pilgrimage to a magical golden tree. She begins her journey with Lance at her side, knowing that the result will determine the fates of her friends and family. As a protagonist, Autumn displays many admirable virtues. She is brave, empathetic, and thoughtful. More importantly, her character demonstrates nuance and growth; she struggles with doubts about her abilities and fears for her loved ones. The premise may not be the most original, but the way the author employs timeless fairy-tale themes is nevertheless delightful. Braginsky’s descriptive skills are vibrant and imaginative, from barely tangible memories, like “a fragment of a lullaby,” to visualizations, such as the “restless sound of the breaking waves.” This world is full of whimsical details, including fairy farmers with flocks of ladybugs and water vessels made from upturned bluebell cups. There is one stumbling block that may deter some readers: The combat scenes, though infrequent, are bloodier than they might expect from middle-grade fiction. Otherwise, Autumn’s story is charmingly executed.

A sweet, slightly intense fairy tale that should appeal to intrepid young readers.