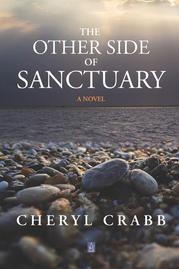 THE OTHER SIDE OF SANCTUARY

To prevent their marriage from collapsing, a husband and wife must make peace with their respective pasts in this debut literary novel.

Rob, a former professional paddleboarder, lives with his wife, Laura, and three children in his parents’ house while running a floundering bar. He remains haunted by his role in the accidental death of his best friend’s sister, Sandra. While out walking with Laura, he sees his old friend, Andre, paddleboarding, which revives his guilt over Andre’s arrest for his sister’s death, and his two-and-a-half year imprisonment for manslaughter. Laura, who senses Rob drawing away from her, runs a small bakery stand to help make ends meet; when she finds an injured cardinal on the street, she looks at her son, Nate, who’s still recovering from the effects of a car wreck: “Now, observing him in his wheelchair, she saw a boy broken like the cardinal that crashed into the window….What could she do about the bird, her son, or anything?” As this summary indicates, Crabb achieves a notable level of psychological realism by revealing her characters’ pasts via a series of emotional triggers. She also gives a highly visual sense of place to the characters’ hometown of Sanctuary, Michigan: “Still, there was no avoiding the glare of the midday sun blazing down…so much so that the village antique store appeared to squint.” In some instances, however, the author’s attention to detail works against the story; a chapter depicting Laura taking Nate to physical therapy, for example, starts off with a weather-based simile (“The wind shook the leaves from the trees that lined the cement path to the front door....The cold air was raw as her emotions”), but then delves into recording the characters’ every single word and gesture for several pages, which feels excessive: “Dr. Azzi…extended his hand to her. ‘Nice to see you again.’ Laura shook his hand before he and Nate exchanged knuckles. ‘How are you doing, young man?’ ” A judicious trimming of such passages would have enhanced some of the more meaningful scenes.

An often affecting, if slightly uneven, novel of familial adversity.