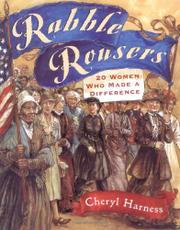 Twenty Women Who Made a Difference

Beginning with Ann Lee, mother of the Shaker movement, and ending with Doris Haddock, fighting for campaign finance reform, Harness (The Revolutionary John Adams, p. 1693, etc.) sketches in words and pictures 20 women who “dared to try to change the world.” She includes those one would hope are familiar to children—Eleanor Roosevelt, Sojourner Truth—but also includes several who are less well-known, like Mother Jones of the labor movement and Margaret Sanger. She also chronicles women who have almost vanished from historical consciousness: Frances Wright, who wrote a book about America in 1821 and fought for the education of slaves and against the legal fettering of women; or Dr. Mary Edwards Walker, an Army surgeon during the Civil War who is the only woman ever awarded the Medal of Honor (although Congress did try to take it away). Each woman’s story is told in two facing pages, with a portrait, a quote, her dates, and some illustrations of her life’s work. This makes the format accessible and attractive, but does mean that information has to be shoehorned in, and there is some awkwardness of style and phrasing. Harness also includes timelines of the abolition, women’s, labor, and civil-rights movements, which give a quick overview of where these women’s lives fit into context. She closes with extremely brief suggestions of resources, places to visit, and a ten-word glossary. Useful for school reports and for expanding the knowledge base of American women’s history. (index, bibliographies, Web Resources) (Biography. 8-12)