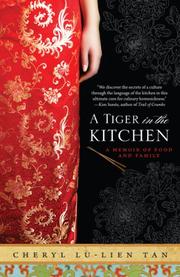 A TIGER IN THE KITCHEN

A Memoir of Food and Family

One woman's quest to reconnect with her family by way of traditional Singaporean food.

Tan's debut memoir explores the connection between taste buds and memory. After her parents' unexpected divorce—as well as falling victim to a brutal restructuring at Wall Street Journal—the author took advantage of her newfound freedom to return home to Singapore, dedicating a year to culinary adventure. She hoped to reacquaint herself with both her family’s recipes and her family itself. Written in the tradition of two classic but different memoirs, Maxine Hong Kingston’s The Woman Warrior (1976) and Julie Powell’s Julie & Julia (2005), the book is a recipe in itself—a dash of conjuring the ancient stories of one's past, a sprinkling of culinary narrative. The result is a literary treat filled with Singaporean tradition, including the surprisingly significant role food plays in the Festival of the Hungry Ghosts and the Moon Festival, among others. Tan argues that stories themselves are a kind of sustenance, and that the oral tradition, like food, begins in the mouth and ends in the stomach. She notes that her journey to Singapore was an attempt to “retrace [her] grandmother's footsteps in the kitchen,” yet she retraces the steps of other relatives as well, including aunts and her mother—all of whom yield information far beyond the recipes. “Cooking wasn't a science; it wasn't meant to be perfect,” she writes. “It was simply a way to feed the people you loved.” As readers meet these loved ones, the narrative becomes all the more engaging. For Tan, cooking functions as a moderator between family members, allowing her to serve all their stories in the proper portions.

A delightful take on the relationship between food, family and tradition.