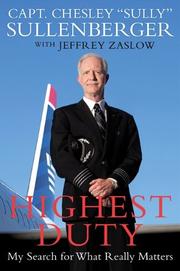 My Search for What Really Matters

by Chesley Sullenberger with Jeffrey Zaslow

The hero pilot who made the successful emergency landing in the Hudson River tells his story, assisted by bestselling author Zaslow (The Girls from Ames, 2009, etc.).

On Jan. 15, 2009, about 95 seconds after takeoff, US Airways Flight 1549 struck a flock of geese, knocking out both engines. Less than four minutes later the plane was floating in the Hudson with all aboard alive and largely uninjured thanks to the cool decision-making of Captain “Sully” Sullenberger. In countless public appearances since the incident, Sullenberger has emerged as an appealingly modest, straightforward guy, a demeanor maintained here in his easygoing, no-frills account of his Texas boyhood, his early infatuation with flying, his years at the Air Force Academy, his peacetime military career and his experiences as a commercial pilot, where safety procedures became somewhat of a specialty. The author recalls lessons learned from his parents, instructors, colleagues, his fitness instructor wife and his two adopted daughters, all of whom contributed to preparing him to handle the dire emergency that made him famous. Careful to credit his fellow crew members, especially First Officer Jeff Skiles, Sullenberger rejects the “hero” label, reserving that for folks who place themselves consciously in danger, rather than for those who have a crisis thrust upon them. The author insists he successfully managed the situation because of a decision made many years ago about the kind of person he wished to be. He claims to have summoned a courage and sense of responsibility common to many other ordinary people faced with extraordinary circumstances. Sullenberger also addresses the dramatic water rescue and his post-flight celebrity, and he answers some of the many moving messages he received. He attributes much of the media attention to timing. People battered by foreclosures, hammered with job losses and stung by decimated savings accounts looked to the story of Flight 1549 and saw that there are “ways out of the tightest spots.”

Of particular interest to aviation buffs, but valuable for anyone interested in how a life lived with integrity prepares a man for the ultimate challenge.