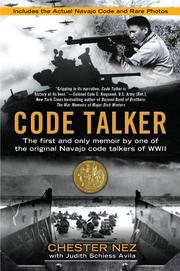 A firsthand account of how the Navajo language was used to help defeat the Japanese in World War II.

At the age of 17, Nez (an English name assigned to him in kindergarten) volunteered for the Marines just months after the bombing of Pearl Harbor. Growing up in a traditional Navajo community, he became fluent in English, his second language, in government-run boarding schools. The author writes that he wanted to serve his country and explore “the possibilities and opportunities offered out there in the larger world.” Because he was bilingual, he was one of the original 29 “code talkers” selected to develop a secret, unbreakable code based on the Navajo language, which was to be used for battlefield military communications on the Pacific front. Because the Navajo language is tonal and unwritten, it is extremely difficult for a non-native speaker to learn. The code created an alphabet based on English words such as ant for “A,” which were then translated into its Navajo equivalent. On the battlefield, Navajo code talkers would use voice transmissions over the radio, spoken in Navajo to convey secret information. Nez writes movingly about the hard-fought battles waged by the Marines to recapture Guadalcanal, Iwo Jima and others, in which he and his fellow code talkers played a crucial role. He situates his wartime experiences in the context of his life before the war, growing up on a sheep farm, and after when he worked for the VA and raised a family in New Mexico. Although he had hoped to make his family proud of his wartime role, until 1968 the code was classified and he was sworn to silence. He sums up his life “as better than he could ever have expected,” and looks back with pride on the part he played in “a new, triumphant oral and written [Navajo] tradition,” his culture's contribution to victory.

A unique, inspiring story by a member of the Greatest Generation.