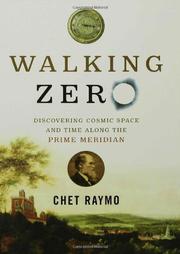 Discovering Cosmic Space and Time Along the Prime Meridian

A brief history of science, in the context of a walking tour along the Greenwich meridian.

Raymo (Climbing Brandon, 2004), an astronomy and physics professor, points out that the Prime Meridian passes through several sites important to the history of science. Beginning at Brighton, he headed north along the numerous walking paths that crisscross the English countryside. Each chapter begins with the landscape, then zooms out to look at how our sense of time and space has expanded since Greek times, when the first measurement of the earth's size was made near Alexandria. Successive scientific revolutions have progressively removed Earth and the human race from the center of the cosmos. Raymo's course brings him near sites where the first dinosaur fossils were found (forcing a revised estimate of the earth's age), near Darwin's home in Down, and near the London home of the Royal society, where Newton and other scientific giants first made their findings known. A key site is the Royal Observatory in Greenwich, where various Astronomers Royal did work that enlarged our conception of the universe, continuing the process begun by the Greek philosopher Aristarchus, whose work anticipated Copernicus. There he also finds John Harrison's clocks, which solved the problem of determining longitude at sea, and gave a reason for locating the Prime Meridian at Greenwich. The final stop is at the radio telescopes at Cambridge, where research established that the universe is some 13 billion years old. Raymo enriches his picture by including the likes of Samuel Pepys, who combined membership in the Royal Society with a career that took him to all levels of Restoration society. Like Pepys, Raymo has a good eye for colorful detail, and brings it to bear on his narrative.

Well written, congenial, and full of lore—about both England and the history of science.