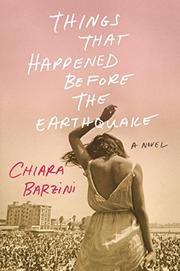 THINGS THAT HAPPENED BEFORE THE EARTHQUAKE

In May 1992, while shooting a commercial in Rome, director Ettore gleefully tells his family they will be moving to Hollywood, “where it’s always summer,” so he can pursue his dream of making a horror movie. His daughter, Eugenia, is horrified, especially after she watches news footage of the Los Angeles riots; the reality, she soon discovers, is as dispiriting as she feared. In a city still reeking of fumes, the family settles into run-down Van Nuys, furnishing their house with yard-sale purchases; Eugenia is thrust into a huge high school where students are warned not to wear gang colors, and no one, including teachers, has ever met an Italian. Barzini (Sister Stop Breathing, 2012) skewers Hollywood pretensions and Southern California teen culture—vacuous, self-absorbed, insular—and conveys, in graphic detail, Eugenia’s strategy for dealing with her unhappiness: meaningless sex. Cloaked in a metaphorical “rubber suit” to ward off emotional involvement, she fills her life “with the presence of sex, as much as I could, as hard as I could,” easily seducing classmates and adding to her conquests a depressed goth screenwriter hired by her father. Barzini invents a cast of disturbingly odd characters: embittered, misanthropic Henry, who supplies Eugenia with drugs and is missing an ear; a volatile, alcoholic former rock star; a hippie drug dealer who offers scream therapy; Eugenia’s grandmother, who tongue-kisses her; two bored Valley girls who wind up abetting a murder; and many others. Eugenia idealizes Italy until a summer trip reveals a culture beset by misogyny, superstition, and violent cruelty. Back in California, she becomes enchanted by the canyons’ natural beauty, where she feels “something primal”; has sex with a mysterious girl who may be having an incestuous affair with her father; and takes more drugs. Finally, in a rushed climax, an earthquake shatters her father’s illusions about filmmaking and draws the dysfunctional family closer together.

A coming-of-age novel that fails to delve beneath the surface.