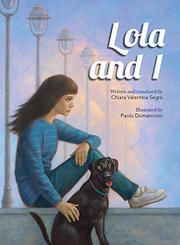 A picture book honored internationally for its depiction of disability portrays the friendship between a girl and her dog.

Lola, says the narrator, is her best friend, even if they don't always agree. When they met, Lola was ill and afraid to go outside, trembling at the sound of cars. But with patience, they could explore more and more together. Domeniconi's warm, soft-focus illustrations are inviting as the pair shop in an Italian city, have a snack in the park, go tobogganing, and even have their portrait painted at the seashore. Such touches as the televised black-and-white movie glimpsed through their window are casually comforting. The narrator's fond descriptions of Lola running on the beach and becoming entangled in many-textured clothes imply that Lola, "that little scoundrel," is the black Lab in the pictures. Not until a luminous hand reaches out in a two-page spread of misty blue-blackness does the narrator explain: Lola, blinded in a car accident five years ago, is her human. She, Star, is Lola's guide dog. Though the illustrations offer clues as to who's who, the clues' likely invisibility to blind readers lends this revelation additional surprise and emphasizes Segré's equally strong text. Composed of vivid, sight-free sensory details, the text's parallel treatment of Star and Lola symbolizes the close bond between dog and human, felt rather than seen.