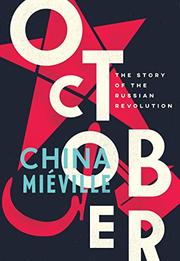 The Story of the Russian Revolution

The award-winning fiction writer revisits the exciting, messy story of an explosive Russia on the brink of civil war.

London-born novelist and political theorist Miéville (Three Moments of an Explosion: Stories, 2015, etc.) takes on the roiling events of the Russian Revolution on the 100th anniversary of the Bolshevik insurrection. From the beginning of 1917, events occurred at a dizzying pace and involved a rich cast of characters, which the author delineates at the end of the book in a “Glossary of Personal Names.” Miéville tells the story in a frank, mannerist fashion. Of course, since readers know the outcome (“purges, gulags, starvation, mass murder”), there is a sense of dark foreboding throughout. The author questions whether it was inevitable that Vladimir Lenin and his cohort would shift increasingly to the left and embrace violent insurrection. No: events were constantly shifting and up in the air, and Miéville presents the action with his novelist’s eye. Looking to the “prehistory of 1917,” the author chronicles the cataclysmic changes in Russia in the late 19th century especially, including emancipation of the serfs in 1861 by Alexander II, who was assassinated by “People’s Will” radicals in 1881. “The man of the future in Russia,” noted populist writer Alexander Herzen, “is the peasant.” The Marxists believed that autocratic Russia was not yet ripe for socialism. Thus, the events that unfolded over the next two decades, as the working class gained confidence and size, were inchoate until brought into sharper focus by external crises such as the Russo-Japanese War, anti-Jewish pogroms, the institution of a “consultative parliament,” the Duma, by Czar Nicolas II, and the deeply unpopular mobilization for war against Germany in 1914. It was a “fraught and protean political culture,” as the author writes, juggling the many activist protagonists such as Leon Trotsky, who was working to incorporate the incendiary ideals of Lenin.

An intriguing march to revolution, told here with clarity and insight.