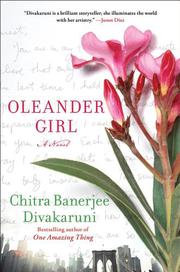 Although her heroine travels to the United States to unravel family secrets, the heart of Divakaruni's cross-cultural novel (One Amazing Thing, 2010, etc.) lies in contemporary Kolkata, India.

Orphaned in infancy, 18-year-old Korobi (the name for Oleander) has been raised in a cocoon of privilege and protectiveness by her devoted maternal grandparents. They have told Korobi little about her parents, but she has found and cherishes a love letter she assumes was written by her mother to her dead father shortly after she was born. Korobi has recently become engaged to Rajat Bose, a far more sophisticated, modern young man whose family owns art galleries in Kolkata and New York City. Korobi’s life seems perfect. But then Korobi’s grandfather, a stern traditionalist, collapses at the formal engagement party. After his death, Korobi’s grandmother acknowledges some bitter truths: Not only is Korobi’s father alive, an African-American whom Korobi’s mother met while studying at Berkley, but he and Korobi’s mother were not yet married when Korobi’s mother died. Despite the potential scandal that she is illegitimate and half African-American, Rajat still wants to marry Korobi, but she becomes obsessed with finding her father before marrying. Although his patience is understandably strained, Rajat stands behind Korobi’s decision to travel alone to America for a month on her quest. In America, the innocent—to the point of being naïve—Korobi faces challenges she has never imagined and takes increasing control of her life as she searches for clues about her father with the help of a kindly Indian private detective. She and Rajat, who has shielded her from his own worries about his family’s increasing financial problems since 9/11, begin to drift apart. She is tempted by a new attraction; he is pursued by a former lover. Both must find a balance between old and new values. Surrounded by diverting secondary characters, Korobi herself is so self-absorbed that it is hard not to feel sorry for long-suffering Rajat.

Like an Indian Maeve Binchy, Divakaruni offers an entertaining if lightweight comfort read.