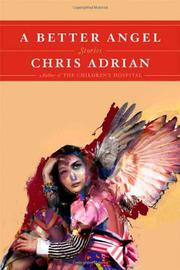 Illness, loss and grief assume ingeniously arresting forms in this short-story collection from a uniquely gifted author who is also a practicing pediatrician and divinity-school student.

Adrian (The Children’s Hospital, 2006, etc.) once again voices the preoccupation with denying death that was so prominent in his sui generis debut novel, Gob’s Grief (2001). Nine often harrowing tales explore the darkness within children rendered older than their years with an intensity reminiscent of Ambrose Bierce and a penchant for fablelike indirection that echoes Angela Carter, with an occasional whiff of Nathaniel Hawthorne’s insistent symbolism. The obsessiveness of Adrian’s fiction reveals itself in recurrent narrative patterns. This method emerges clearly in “High Speeds,” which depicts an intellectually precocious boy coping with his father’s death in a plane crash (during a drug run), his nowhere mother and his deeply disturbed younger brother by concealing himself inside a rebellious fantasy world inspired by the loopy Martian adventure novels of Edgar Rice Burroughs. Similarly outré protagonists crop up frequently. “The Vision of Peter Damien” shows a boy who seems immune to illnesses afflicted by omens derived from the incidents of 9/11 (repeatedly channeled in several stories) that promise a cleansing apocalypse. In the title story, a grown man caring for his dying father is visited and abused by a quarrelsome angel. And in “Why Antichrist?” a boy hoping to commune with his dead father accidentally summons Satan instead. An overload of suffering little ones who develop similar otherworldly traits, plus numerous sets of twins and doppelgängers, edge the collection perilously close to risibility. But Adrian’s best pieces will haunt you unmercifully: “The Sum of Our Parts” (disembodied spirit of a suicide prowls the hospital ward); “Stab” (separated Siamese twin represses the loss of his brother by joining a deranged girl’s killing spree); and “A Child’s Book of Sickness and Death” (stories compiled by the surviving bearer of horrific birth defects).