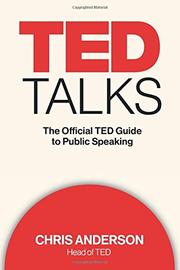 The head honcho of the much-watched (and oft-satirized) TED Talks shares how he gets the best out of speakers.

Martin Luther King Jr.’s “I Have a Dream” speech, writes Anderson, clocked in at 17 minutes, 40 seconds: just a hair under the 18 minutes allotted to speakers at the TED Conference, a group that’s included high-wattage thinkers like Bill Gates, Andrew Solomon, and Steven Pinker. The King comparison is apt, since Anderson writes with a preacher’s enthusiasm and messianic demeanor about the virtues of TED Talks and about why you might want to master the skills involved in presenting one. From appropriate dress to calming your nerves to revising to pacing, the bulk of the book is filled with tips. Hone the “throughline” of your talk—its (usually counterintuitive) point—into 15 words. Own your vulnerability and express it onstage. Emphasize parable and metaphor in your storytelling. Avoid bombarding people with slides, especially ones with lots of bullet points (“bullets belong in The Godfather”). Avoid airy expressions of gratitude when you start and finish, and focus instead on more earthbound questions and assertions that stoke curiosity. Anderson provides examples from the TED vault to bolster his points, mentioning speaker shipwrecks anonymously and calling out particularly surprising and successful ones by name—he refers a few times to Monica Lewinsky’s 2015 talk as an example of intense preparation, fending off fear, and telling a story that resonates. The author’s exhortations to constantly revise, rehearse, and rethink your story are all unimpeachably practical. (Indeed, the book unintentionally doubles as a helpful writing guide.) So it’s disappointing that the closing chapters devolve into a TED history lesson and overenthusiastic cheerleading about the organization’s world-changing powers—an oddly soft conclusion from a writer who demands we stick the landing.

A handy guide for novice and moderately experienced speakers, once you’ve dodged the TED boosterism.