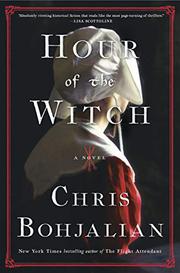 HOUR OF THE WITCH

A Puritan wife shocks her community and risks her life to file for divorce in 1662 Boston.

For more than five years, Mary, age 24, has been married to Thomas, 45, a prosperous miller. Thomas has been physically and sexually abusive, always taking care that there are no witnesses. He castigates Mary’s intelligence, telling her she has “white meat” for brains. The marriage is childless, drawing community suspicion to Mary. When she can’t hide bruises on her face, she lies about their provenance. The behavior, she tells herself, only occurs when Thomas is “drink-drunk.” The coverup continues until, cold sober, Thomas drives a fork into Mary’s hand, breaking bones. She flees to her parents’ home and files for divorce, which is allowed but only if grounds can be proven. Forks are a major motif: Not merely newfangled “cutlery” which Mary’s father, a shipping entrepreneur, hopes to profit from importing, but miniature pitchforks viewed by the Puritans as “Devil’s tines.” The forks, as well as other clues—a mysterious pestle, a pentagram etched on a door frame—are used to counter Mary’s compelling, but unwitnessed, claims of cruelty with insinuations of witchcraft. Divorce denied, Mary must return to the marital home and resort to ever more drastic expedients in her quest for freedom. Mary comes from privilege, and her parents clearly care about her. (Unlike the divorce magistrates, they don’t believe she injured her hand by falling on a tea kettle spout.) That they allow her return to Thomas to avoid witchcraft charges defies plausibility—death at Thomas’ hands seems a more immediate prospect, and her family wealth affords many other options. The charges come anyway—timed for maximum melodrama. The language, salted liberally with thee and thou, feels period-authentic. The colonists’ impact on nearby Native tribes is not Bohjalian’s primary concern here, but the Hobson’s choice facing women in Puritan society is starkly delineated.

Illustrates how rough justice can get when religion and institutional sexism are in the mix.