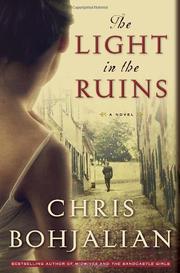 THE LIGHT IN THE RUINS

In post–World War II Tuscany, a serial killer targets the remnants of a noble family.

In Bohjalian’s literary thriller, the ruin of the aristocratic Rosati family is triggered by Nazi interest in an Etruscan tomb on their estate, Villa Chimera. The action ricochets between the war years, when the Rosatis—Marchese Antonio, Marchesa Beatrice and their children, Marco, Vittore and Cristina—were unwilling hosts to Nazis and Fascists, and 1955, when Francesca, widow of Marco (her children also perished during the war) is found brutally murdered in a seedy pensione. The murderer’s grisly MO entails extracting the heart of his victim, presumably with a surgical saw. Called in to investigate, Florentine detective Serafina Bettini, scarred by burns sustained while fighting as a partisan against the Germans, is baffled. (Occasional italicized asides in the killer’s first-person voice reveal only that he—or she—has an unspecified grudge against the Rosatis and intends to pick them off one by one.) When Beatrice is murdered in the same manner in a much safer Florence hotel, Serafina divines that the Rosatis are the killer’s targets, but why? Because they allowed Germans to extract artifacts from the tomb and artwork from their mansion during the war, and because Cristina was in love with a German lieutenant, the clan were seen as collaborators by some, but Serafina’s patchy memory eventually discloses that the Rosatis sheltered her and fellow partisans on the estate. Nor did the Rosatis escape wartime suffering: They lost Marco and their grandchildren; and Antonio died a broken man. In 1955, Villa Chimera is still a pile of rubble the family cannot afford to repair, much less inhabit. As Serafina struggles with her own postwar nightmares, she must learn why the killer hates the Rosatis—only then can she identify him before the next Rosati dies.