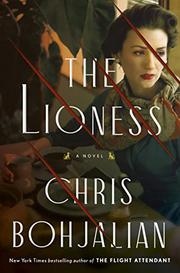 An actress and her entourage are kidnapped by Russians in Bohjalian’s uneven thriller.

In 1964, Hollywood’s gossip rags are agog as movie star Katie Barstow marries gallerist David Hill and takes her inner circle along on her honeymoon. And an adventuresome honeymoon it is—on safari in the Serengeti with aging big-game hunter Charlie Patton, who once helped Hemingway bag trophies. But Katie is not the star of this ensemble piece. The populous cast—a who’s who at the beginning is indispensable—includes Katie’s publicist, Reggie Stout; her agent, Peter Merrick; her best friend, Carmen Tedesco, a supporting actress who plays wisecracking sidekicks; and Terrance Dutton, Katie's recent co-star, a Black actor who's challenging Sidney Poitier's singularity in Hollywood. With obvious nods to Hemingway’s worst fear—masculine cowardice—Bohjalian adds in Felix Demeter, Carmen’s husband, a B-list screenwriter who reminds his wife of Hemingway’s weakling Francis Macomber. Felix seems a superfluous double of David, who feels inadequate because Katie is the breadwinner and his father is CIA. Then there’s Katie’s older brother, Billy Stepanov, whose abuse at the hands of their mother shaped the psychologist he is today; Billy’s pregnant wife, Margie; and Benjamin Kikwete, an apprentice safari guide. Thus, a proliferation of voices whose competing perspectives fragment rather than advance the story. The kidnapping plot seems less designed to test each character’s mettle than to exercise Bohjalian’s predilection for minute descriptions of gore. The most heartfelt portrayal here is of the Serengeti and its flora and fauna, but none of the human characters net enough face time to transcend their typecasting. The motives behind the kidnapping might have lent intrigue to the proceedings, but foreshadowing is so slight that the infodump explainer at the end leaves us shocked, mostly at how haphazard the plot is.

Perhaps A-list screenwriters will be able to spin TV gold from this sketchy treatment.