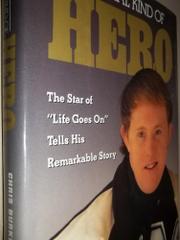 A SPECIAL KIND OF HERO

Awkwardly told tale of how one family raised a Down's syndrome child to achieve far beyond expectations. Despite Burke's name as primary author and the implication of the subtitle, this story is not told in his own words (with the exception of three very brief sections), nor is it an ``as told to''; this is journalist McDaniel's overwritten account of how the Burkes raised their handicapped son and how he realized his childhood ambition to become an actor. Against all odds, Burke has become a star of the TV series Life Goes On—in which he portrays a high-school student with Down's syndrome—a role model for others, and a spokesperson for various organizations promoting the rights of the handicapped. Unfortunately, although McDaniel, a former Life correspondent, exhibits considerable zeal in researching Burke's life story, she shows limited ability to select the significant detail. She seems to have spoken to—and quoted—nearly everyone who has ever known him, even when their observations and insights were obviously limited: e.g., teachers' aides, former classmates, co-workers at the public school where he once ran an elevator, even a guest star on Life Goes On. From them come such comments as: ``He was quite a kid''; ``He was a good kid: he didn't bother anyone''; ``He knew how to get his words across and everything.'' It is difficult to believe that even readers with Down's syndrome family members will not tire of the Burke minutiae (Chris's words on first meeting Dan Ackroyd: ``Hi, Dan!''). On the plus side, the final chapter contains useful information on the syndrome and puts Burke's life into perspective. The story of how ordinary people met extraordinary demands and how a special child became an unexpected success, marred in the telling by repetition and overattention to trivia. (Twenty- five b&w photographs—not seen.)