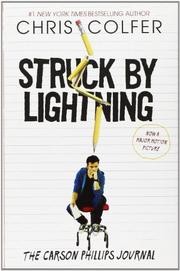 High school senior Carson Phillips will get into Northwestern and be the youngest freelance journalist published in all the major outlets, and he’s not above blackmail to get there.

Although he’s single-handedly kept the Clover High Chronicle in print and the Writing Club functioning (by teaching the journalism class, one of many credulity-stretching details) for years, Carson is worried that he won’t get into his dream school. The acceptance letter will be his ticket out of the backward town of Clover which, like high school, is peopled by Carson’s intellectual inferiors. When his counselor suggests he edit and submit a literary magazine with his application, Carson and his dim, plagiaristic sidekick Malerie hatch a scheme to blackmail a chunk of the student body into submitting work. Colfer’s joyless and amateurish satire is little more than a series of scenes that seem to be created as vehicles for lame and often clichéd one-liners. Once Carson’s bullied his classmates (stereotypes one and all) into writing for him, he develops a soul and dispenses Dr. Phil–worthy advice to his victims—and he’s confused when they don’t thank him. Carson is so unlikable, so groundlessly conceited that when lightning literally does strike, readers who’ve made it that far may well applaud.

This sophomoric sophomore effort reads like a rough draft for a screenplay…which it may well be.