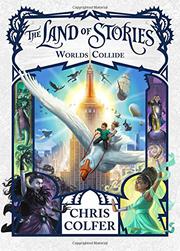 From the Land of Stories series, volume 6

Witches and other fictional baddies move to conquer this world when a portal opens between the Land of Stories and a branch of the New York Public Library.

For the finale to his popular series, Colfer recaps the first five episodes, then brings together most of the teeming cast to wage, as the narrator admits, “an overdue battle of good versus evil.” Flanked by a wish-fulfilling frame story in which Conner, one of the white twin protagonists, has grown up to become a revered writer of middle-grade fantasies, the climactic struggle begins with the portal’s opening in the sumptuous Rose Reading Room. It spreads to Central Park and other locales as the then-teenager and allies fictional or otherwise (including a lot of ineffectual Marines) square off against his powerfully gifted sister, Alex, the dastardly witches who have ensorcelled her, and a Literary Army led by (among others) the head-chopping Queen of Hearts. Many set pieces ensue, from a pitched battle with gingerbread soldiers to no fewer than six individual witch-fairy duels in a row—not to mention gags and one-liners aplenty, topical references, and adolescent posturing (“Knock it off, boys,” Merlin snaps at one point, “there are much bigger issues in this story”). With one exception, characters who die bleed words instead of blood, and all of the destruction in both worlds is neatly fixed at the end by an albino dragon ( see Book 3: A Grimm Warning). Dorman’s vignettes at the chapter heads offer glimpses of settings and characters.

A busy if ultimately tidy wrap-up for fans.