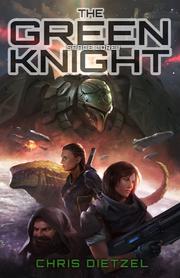 From the Space Lore series, volume 1

A space princess tries to halt a terrible war—seemingly prompted by her father—while facing an appointment with execution at the hands of the mysterious Green Knight.

The first in a Space Lore series by prolific sci-fi author Dietzel (The Theta Prophecy, 2015, etc.), this novel brings a Lucasfilm vibe to select bits of Arthurian romance and legend (with a few character names and themes from Shakespeare thrown in—for good measure-for-measure). For six years, Vere CasterLan, princess in a space monarchy, has dwelled in self-exile with rogues and thieves, far away from her treacherous royal family. She fled a Hamlet situation in which her father, King Artan of the CasterLan Empire, remarried unwisely—and commanded Vere to wed the heir to the rival Vonnegan Empire soon after the curious disappearance of her true love. Now the king is dying, and he has apparently ordered an unprovoked attack in Vonnegan territory, resulting in war. Vere and her motley crew of frenemies and allies (including a giant reptile, a sort of Chewbacca figure) race to sort out what she considers a dreadful misunderstanding; meanwhile, bounty hunters from all over the galaxy seek her death. Threatening to overstuff the narrative, though, is the title figure, the enigmatic Green Knight (borrowed from the medieval tale of Sir Gawain), who was beheaded by Vere in a tavern confrontation yet survived. He now embraces her vow that she will seek him out on her home planet within seven days to receive a return blow. Perils gradually whittle down Vere’s band of loyalists, and Dietzel proves a master at the larger-than-life ensemble swashbuckling of Joseph Campbellian–infused space opera. The switch in traditional leadership roles, with strong heroines trading places with male heroes, comes off painlessly, and a forceful space-battle climax is worthy of author E.E. “Doc” Smith himself. Celtic-myth flavor seldom seems forced or mashuplike, and further installments in the Space Lore books promise to bring additional bits of Camelot into the exciting universe Dietzel has created.

Stirring sci-fi action that should appeal to fans who applaud the introduction “A long time ago in a galaxy far, far away.”