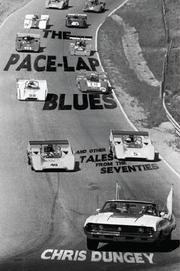 The Pace-Lap Blues and Other Tales from the Seventies

In his debut collection of 16 short stories, Dungey examines a simpler but not necessarily better time for the lower-middle class of America’s Midwest.
At the heart of this compendium is Hector Fritch, a hard-partying college dropout in Michigan. He starts out young and invincible but ends up impregnating his girlfriend, Gwen, and they marry. Hector has a job on the General Motors assembly line during the energy crisis of the mid-1970s, an era that was the beginning of the end for the United States’ dominance in automobile manufacturing. Michigan-based autoworkers such as Hector are soon suffering as more Americans turn to energy-efficient imported cars: “There was a brief panic about energy consumption. For a time, car buyers lost interest in the big Pontiacs Hector helped build.” During his increasingly lengthy layoff periods, Hector is a stay-at-home dad to his young son, Wes; he takes classes part-time, too, and spends too much time and money partying with his deadbeat friends. That annoys Gwen, the family’s principal breadwinner, who’s stuck in a dead-end waitressing job. As Gwen says to Hector after he spends the night in the drunk tank, “You’ve been letting off steam about once a week.” The collection tracks the inevitable dissolution of Hector and Gwen’s relationship, aggravated by economic stress, suburban boredom, his thoughtlessness and her restlessness. Dungey does an admirable job developing believable, flawed characters caught up in changing times. A retired auto worker himself, he successfully takes readers inside that industry in tumult, documenting the impact on those involved. In Hector, Dungey has created a symbol of American ennui who is content to get along without striving overly hard for the ideal of success. It’s unclear by book’s end what the future holds for Hector, although there’s a hint at his possible redemption.
A revealing portrait of a troubling time and situation that resonates today.