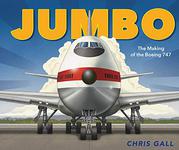 In a properly lap- and eye-filling format (it has a 2-foot wingspan), a soaring tribute to the “Queen of the Skies.”

Following Go for the Moon (2019), Gall pays homage to another outsize triumph of engineering wizardry and industrial might. A mammoth machine two and a half times larger than any other jet liner of its time, Boeing’s 747 is so big, he claims, that the Wright brothers could have made their entire first flight in its fuselage without leaving the coach section. It debuted in 1968 and, though now retired from domestic use, is still the fastest commercial passenger plane in the world. Drawn with Gall’s customary clean precision, a mix of dramatically angled full-body portraits, glimpses of workers in a gigantic assembly plant, cutaway views of cockpit and spacious seating areas, detailed sectional diagrams of wings and engines, and flocks of smaller aircraft from a paper plane to a suddenly dinky-seeming 737 combine to underscore the scope of the technological achievement as well as both the sheer scale of the jet and of the effort that went into building it. There is also a dream-come-true element, as a red-haired, pale-skinned child frequenting the pictures through each stage of the leviathan’s design and assembly makes a final appearance in the pilot’s seat and turns out to be Lynn Rippelmeyer, the first woman to captain a 747. Clad in late-20th-century attire, the small human figures clustering throughout add a sense of period but are nearly all White.

A blast from the past, sure to transport fans of all things big and loud.