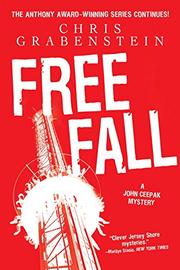 Sea Haven detectives Ceepak and Boyle (Fun House, 2012, etc.) investigate the murder of a 94-year-old dentist who has a very pretty nurse.

There are two good reasons that Danny Boyle can’t believe that Christine Lemonpolous tried to strangle her nighttime employer, Shona Oppenheimer—and they become even clearer to him when she changes from her nurse’s scrubs into a T-shirt. Straight-arrow Detective John Ceepak also believes Chris’ claim that Shona attacked her, and so John's mother, Adele, putting her inherited millions to good use, hires Harvey Nussbaum to defend Chris. Harvey gets Shona to back down but realizes that he may have a harder time getting Chris off the hot seat when Arnold Rosen, her daytime employer, drops dead after she hands him a cyanide-laced pill. Arnie’s daughter-in-law, Judith, who’s also Shona’s sister, is screaming for blood, while Arnie’s sons David and Michael fight over who’s more deserving of their father’s love and his money. While Ceepak and Boyle try to track the poison to its source, Ceepak is distressed to learn that Sinclair Enterprises has hired his no-account dad, now a certified Free Fall technician, to run its StratosFEAR ride. Ceepak senior hopes to serve himself a cut of Adele’s moolah. Will Sea Haven have to trade in its status as a summer funland for the title of dysfunctional family capital of New Jersey?

Ceepak and Boyle’s eighth blasts the energy of a tilt-a-whirl into an offbeat procedural.