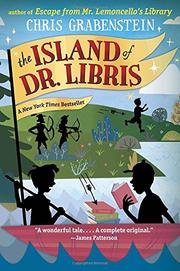 THE ISLAND OF DR. LIBRIS

Unhappily spending the summer with his mother in a lakeshore cabin she’s rented from a university colleague, the 12-year-old finds no Internet or TV but plenty of books in a locked cabinet. (Finding the key is a relatively easy puzzle.) When he reads The Trials of Hercules in Dr. Xiang Libris’ library, he hears the voices of Hercules and Antaeus outside. They’re fighting on an island just offshore. Reading Robin Hood, he hears the sound of swordplay. When he explores the island the next morning, he meets the characters he heard, not only brought to life, but also interacting with each other. Grabenstein’s similarly powerful imagination unfurls a grand series of adventures in which Billy and neighbor Walter Andrews are pursued by the Sheriff of Nottingham, search for buried treasure with Tom Sawyer and save Billy’s parents’ failing marriage. In this entertaining literary romp, the author includes references to over 20 classic tales, from Aesop’s Fables to Holes. For curious readers, he’s listed the titles at the end, but familiarity with these stories is not required to appreciate this fast-paced fantasy.

Readers will wish their summers were so eventful.